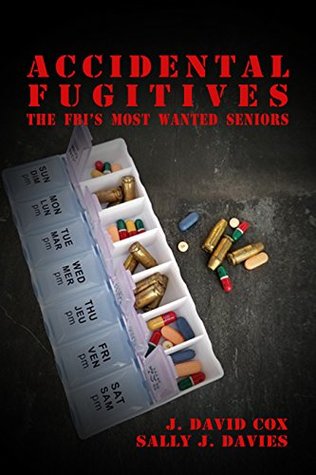 Husband and wife team, J David Cox and Sally J. Davis, have ventured into the world of fiction with this their first novel, Accidental Fugitives: The FBI’s Most Wanted Seniors.  Drawing on aspects of their own lives and recent political developments in America under the Trump administration, they have written an action-packed novel centred on Nancy and Charlie Moon, two older Canadians vacationing in America, who unwittingly become illegal aliens and are forced to flee due to crimes they are suspected of committing.

It is a rollicking good tale that almost defies categorisation – part political satire, part action thriller, with a strong comedic thread.  The language is uncomplicated and the prose is fluid.  The story moves along at a lively pace.  I was never bored and was kept guessing.

I cared about the two main characters and their travelling companions, fleeing draconian laws, persecution, the FBI and the heavy hand of US Immigration (ICE).  The prospect of the two senior citizens outwitting the authorities delighted me.  (Note to reader:  I reside in a country whose modern history commenced as a penal colony).  There is one tender moment involving a choice between personal liberty and a dog, where I felt a strange connection with Nancy.  My one slight quibble is that apart from Nancy and Charlie, the other characters seem slightly clichéd at first.  Thankfully, they become more multi-dimensional as their backstory is revealed.  That could be the point however, as until we get to know someone, clichés are often our only point of reference.  The villains, the vigilantes, are as clichéd as they come.  Again, perhaps this is typical of the action genre or of these type of folk?

The story has a well-developed plot line.  Although the novel is largely a ‘feel good‘ story where you can cheer the goodies and boo the baddies, the socio-economic and related political issues besetting America are covered sensitively (at least in my opinion).  Fair-minded liberals and conservatives alike will hopefully enjoy this escapade.  This puts Accidental Fugitives in a class above B-grade action novels where plot lines can often be purely incidental, and the characters and issues largely black and white.  Is this a must-read book about a fast approaching dystopian future characterised by extremism, lawlessness and societal breakdown?  You be the judge.  For many, this is the world they already live in, but there are others who are increasingly vulnerable and on the brink of slipping into this world, and some who are just plain fearful.  A call to action is probably too much to expect from this modest little book.  But it might just cheer you up a bit.

Now if you are like me and are prone to flights of fancy and philosophising, then you will enjoy the questions this book raises.  From the outset, I questioned how I would react if confronted by vigilantes as happened with Nancy and Charlie.  Would I resist or fight back?  Would I focus on saving myself or would I try to save others too? Then my mind galloped to what would be Charlie and Nancy’s ultimate fate.  Without giving too much away, I considered a range of possibilities.  What if they were forced to return to Arizona and were wrongfully convicted of crimes for which the death penalty was the punishment?  Goodness me, if the President of the United States declines to front up to a legally-mandated inquiry in fear that the “truth” will not be heard, then what hope is there that justice will be served for illegal aliens with absolutely no rights at all?

Alternatively, what would be their fate if they managed to escape to Canada?  Would they have the opportunity to prove their innocence?  Would the vigilantes give up on their chase?  What if they are forced to flee again?  Would anywhere be safe?  What if they sailed to Australia seeking refugee status?  In a fictional Australia, they might be turned back or arrested and handed over to the Americans as part of some backroom deal.  Or might they seek refuge in another friendly Commonwealth country like the United Kingdom?  If worse came to worse, they could hole up in the Canadian consulate or Ecuadorian Embassy indefinitely.  The possibilities are endless and dark.  But why worry, it is just fiction, right?

My rating:  Fun, nuanced and thought-provoking.
Available from Amazon

An abbreviated review will appear on GoodReads in due course (without the flights of fancy).  I suppose I may also have to learn how to do an Amazon review at some point.

Disclosure:
I have no personal connection with the authors, except in so far as I follow J. David Cox’s blog and from time to time share pleasantries and a robust exchange of ideas.  You can check out Mr Cox’s blog by clicking here.  As far as I am aware, Ms Sally J. Davies, does not have her own blog, and she remains somewhat of a mystery.

This is also my response to the Ragtag Daily Prompt ‘Elder‘ since the two main protagonists of this book are senior citizens.