It’s summer in the southern hemisphere.  In southeast Australia, it has been a shocker.  In Canberra (the nation’s capital), we have had drought, a huge hailstorm and now fire in the Namadgi National Park to the south and west.

We also had a small colony of Little Red Flying Foxes take up residence in one of our town parks.  When we first discovered the colony, we asked our son whether we should report it in.  He told us that the ACT Government (that’s our local government) most likely already knew about it.  They didn’t.  Turns out the Little Reds haven’t been seen in Canberra for 23 years.  Imagine that!

We’ve been keeping a close eye on the little foxes because the heat really affects them.  Many die when the temperature gets up to around 42ºC.  You can imagine how concerned we were when the temp climbed to our hottest on record at 44ºC in early January.  Much to our relief, they survived, possibly because their roost is located in dense shade right next to a lake.  The lake probably provided them with some evaporative cooling.

It has been really difficult to get a nice photo of the little foxes with so much smoke in the air combined with the dense canopy.  The smoke problem was fixed (temporarily) when a huge hail storm moved through.  Unfortunately, the hail storm also killed several hundred of the vulnerable grey-headed flying foxes resident in the capital’s main town park (Commonwealth Park).  Many birds and animals were killed in the hail storm, so again we were worried about the little colony in the west of town.  The storm must have just missed it because hail damage was minimal in that area.  Phew.  Here they are with shiny blue sky so that you can see them properly.  Aren’t they gorgeous? 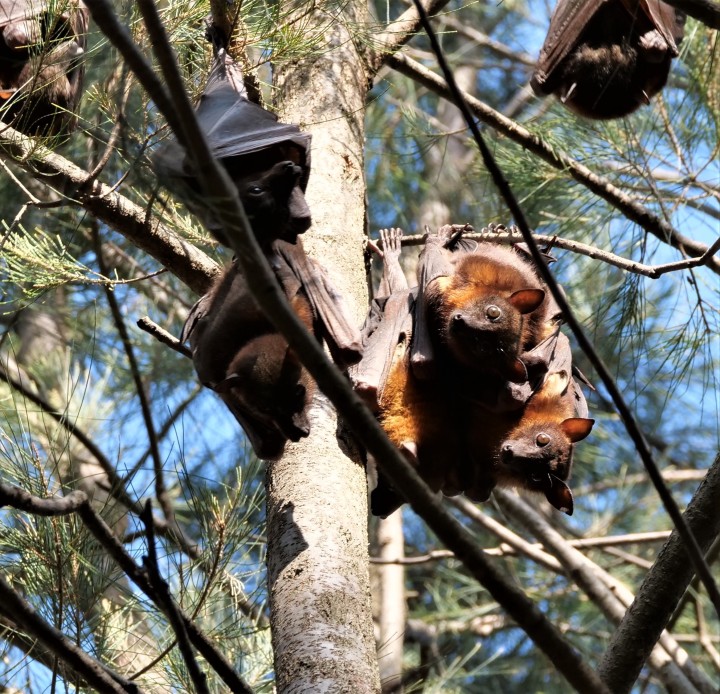 I love this photo of the little bat climbing up to its friends.  The higher uppers, however, weren’t happy at all, and a squabble ensued.  Typical, right?  Note the little buddy on the far left.  It never took its eyes off the photographer the whole time.  This is one time when it is a pleasure to be in the red.

Sunset.  Time for the Little Red Flying Foxes to venture out. 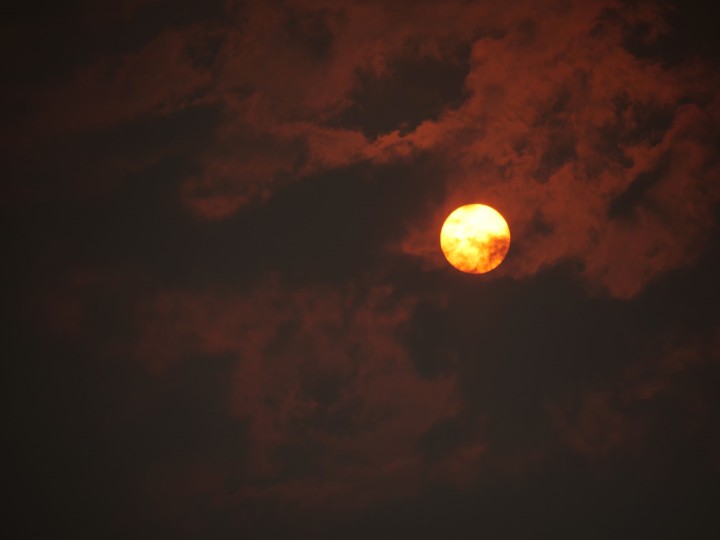 And now the moon.  Also coloured red by dust from the fires.

I’m also jumping into The Changing Seasons – January challenge, hosted by Su at Zimmerbitch,  I will have another post for that challenge, but this has to be the best of my January news.