A long time ago in a land far away, my True Love and I had a big adventure.  It was on our European backpacking tour of ’91.  While we were in Ireland, we decided we would lash out (spend up big) and take an organised day tour of Killarney National Park.  Our mode of transport was horse and cart, and then dinghy for the return across Loch Léin to Ross Castle (I hope I’ve got that right.  It was such a long time ago).  For the more intrepid traveler, there was the option of riding a horse.  Now I’m not that intrepid but I used to be a good rider, so I chose to ride.  My True Love wisely chose to travel by cart.

I’ve taken photos of my photos so I apologise for the poor picture quality, but in this case, imagination is probably better.  My True Love thinks I was one of two riders on the day.  He recalls my horse being the most “determined” of the two. 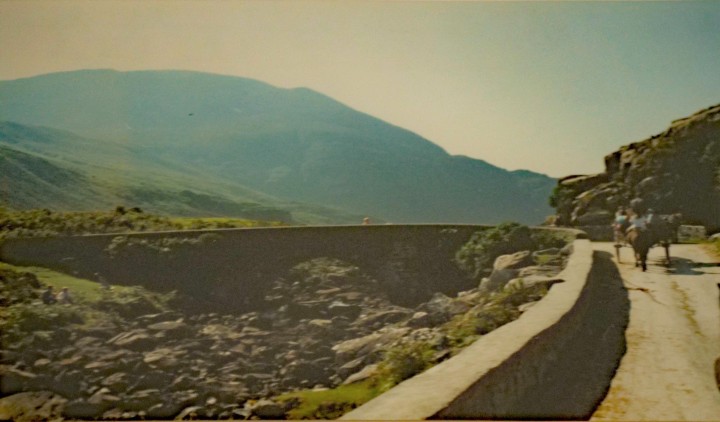 It was an unusually hot day for Ireland.  At first I thought my pony was badly affected by the heat as it plodded reluctantly up the hillside.  It was oblivious to my heel-digging and pleas of “giddy-up”.  I fell far behind my traveling companions.

Meanwhile my True Love was having a lovely time in the cart, enjoying the view and the company of two young, attractive Swedish women.  He claims he doesn’t remember that part.  Like I said, he enjoyed the view.  The young ladies, of course, were very interested in the devilishly handsome (in my opinion) young Australian and wanted to hear all about koalas and other Aussie icons.  Although very introverted, judging by the snippets of the conversation he relayed to me later, I believe my True Love became quite loquacious.  I do like the word, loquacious, don’t you?  Must be because it rhymes with delicious.

I don’t know if you’ve ever been on a pony trek, ladies and gentlemen?  If you have, you’ll know that many of the trekking ponies are stubborn little beasties.  By sheer force of will, I got that pony to maintain a donkey’s pace.  There may have been the odd occasion when it just refused to budge, whereupon I squeezed my legs (as experienced riders do) or flapped them against its sturdy pony flanks.  Neither technique seemed to work.  I wanted to yell “help” but that would not have looked cool for an experienced rider such as myself.  Finally, as we approached the crest of that long winding hill, and due to a great deal of skill on my part, the pony began to quicken its pace.  Hang on, I thought, the race is on, as the pony tossed its head and jangled the reins.  It walked as if floating, and momentarily broke into a trot before suddenly taking flight, leaving all in its wake.

I am sure the views from the top of the pass must have been brilliant, but I really didn’t have time to admire them.  My pony had only one thing on its mind — the chaff bag at the end of the trail.  I managed to slow the pony as we approached a fork in the trail.  Oh gosh, I thought, where to now?  At this point I thought I was going to lose my seat, as the little pony shilly-shallied from left to right to left again at quite some considerable speed.  To avoid certain disaster, I eased the reins and abandoned any sense of control.  The pony chose its course and plunged ahead with added enthusiasm, before finally coming to a stop further along the trail.  It was at least 30 minutes, or perhaps even an hour, maybe two, before the rest of the party caught up.

I guess I don’t look too happy in the photo below.  I might well have been exhausted and just a tiny bit hypoglycemic, my hypo lollies being with my True Love on the cart.  And of course, I had hat head (this matters when your True Love has been hanging out with blonde bombshells).

Wait.  There’s more.  After lunch, the dinghies were broken out for the trip home.   I fluttered my eyelashes none too subtly and maneuvered my Love into the second dinghy with the two older ladies.  The young ladies, being more nimble (I could barely walk), got the first boat and zoomed away.

It really was lovely — the view, the serenity, the water lapping.  Picture perfect to be sure, to be sure.

But hot.  Very hot.  So naturally the outboard motor of our dinghy ran out of petrol in an isolated part of the loch.  So we waited.  And sweated.  And waited and sweated, until eventually we attracted the attention of a passing boat.  And then we waited some more for petrol to be delivered.

Our other passenger doesn’t look too happy in the photo below.  We think she may have needed to do a wee wee.  Or maybe it was the storm brewing in the background?  This was the 90s, so no life-jackets.  As light faded, we finally arrived at Ross Castle and we all drank lemonade.

Oh wait …. I’ve thought of a smutty joke.  Are those my hypo lollies in your pocket, or are you just pleased to see me?

I dedicate this song to my True Love.  It is not very Irish, but no matter.

Response to the Ragtag Daily Prompt — Horses and Subtle.

Note for readers:
Tracy is a Type 1 diabetic and thus, should have known better to carry her hypo lollies in her own pocket.  But her jeans were a bit too tight.

This story is so epic, I may write a bush poem about it one day.