Today’s post will introduce two very strange aquatic creatures found at one of Canberra’s nature reserves — the first, one very odd looking duck, and the second, quite duck-like.

Australia’s musk duck looks half-fish, half duck.  It must be the oddest looking duck I’ve ever come across.  It is so named because it is very smelly, emitting a musky smell from scent glands on its rump.  Musk ducks spend most of their time in the water.  They even sleep on the water.  They can fly, but launching from the water or ground is hard work, so they do so infrequently.  When fleeing predators, they choose a watery escape rather than take to the wing.

Solitary birds, they will defend their territory from other musk ducks.  Males exude machismo.  They have a pendulous lobe on their neck which they puff out to impress the ladies.  My youngest son was only three years old when he saw his first musk duck, but he vividly recalls being rushed by an amorous specimen intent on protecting his lady.  The male’s protective attitude is, however, merely pretence.  Once the lady musk duck is inseminated, the male dumps her and moves on.  There is no mating for life or assistance with raising offspring.  Still, I can’t help admire their self-confidence and grace in the water. 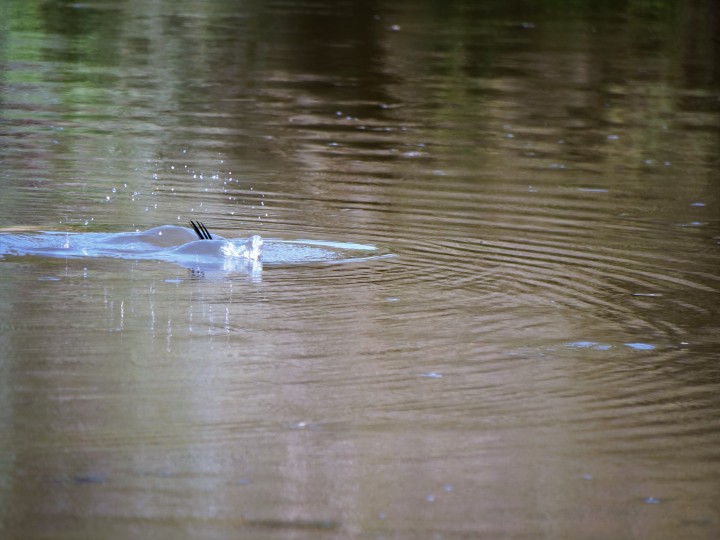 How is this for handsome?
I was fascinated with how the water beads on the feathers. 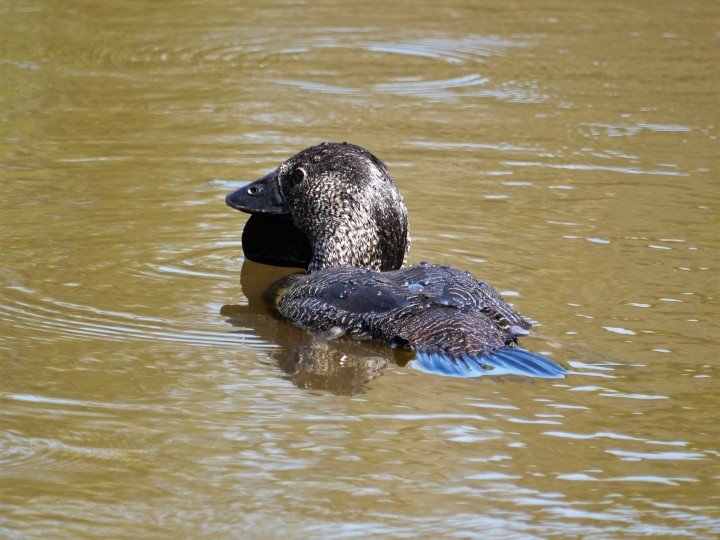 If you think the musk duck is strange, then the platypus is even stranger.  The platypus is a monotreme, a mammal that lays eggs but suckles its young, excreting milk through the pores of its skin.  Males are about 50cm in length, and females slightly smaller.  Researchers have found that the platypus has 10 sex chromosomes, unlike other mammals which have two (XY), and it has genes in common with birds and reptiles (read all about it on Wikipedia.  It is totally fascinating).  And what a funny looking creature it is.  It has a bill like a duck, a tail like a beaver and webbed feet like an otter.  Male platypus are also one of the few venomous mammals.  They have a spur on their back leg that can inject poison.  Like the musk duck, platypus are polygamous and the male may have several ladies across his range.  Males play no role in raising young.

The platypus needs to eat about 20% of its body weight each day to survive, so it spends about 12 hours each day in the water feeding off the river bed and the bottom of dams/lakes.  Maintaining the health of waterways is vitally important.  (Australians will know that recent low-levels of oxygen due to temperature fluctuations and low water flows, killed off massive numbers of fish and crustaceans at Menindee.  Be wary when vested interests lobby for extracting “under-utilised” water from elsewhere and piping it inland.)

The platypus swims completely blind, closing its rather inefficient eyes in the water, and uses its bill to sense food through tiny electro-receptors.  Platypus eyes contain double-cones, which most mammals do not have.  Double-coned eyes are found more commonly in fish, reptiles and birds.  So you get the idea; the platypus is truly remarkable.

Fish, bird or reptile?  No, just a very unusual mammal. 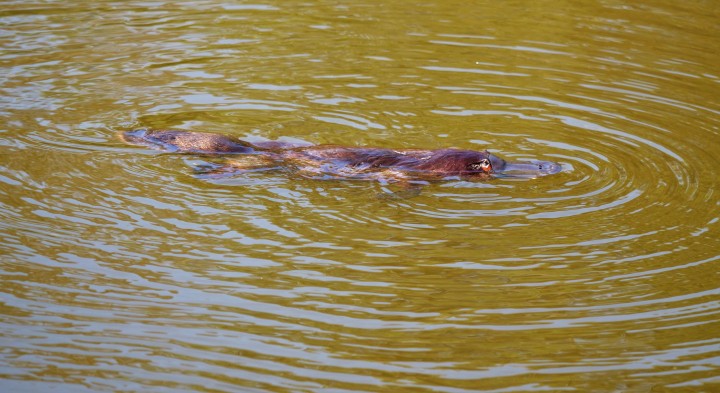 Neither of these critters spend long on the water’s surface.  They can travel a considerable distance under water, so getting a good photo before they dive again* involves more luck than good planning.  My thanks goes to my true love for taking the platypus photos.  I could manage only a few weeds.  I did, however, have much better luck at photographing the musk duck.  Perhaps he was trying to impress me?

*Response to the Ragtag Daily Prompt — Skedaddle.  Click on the link to join in.