The Queensland Resources Council has just announced that Queensland (Australia) coal exports have reached a record high.  The Australian government must be jumping for joy, with the resources sector once again contributing substantial growth in federal revenues (and the election war-chest).  Apparently two thirds of our coal is destined for steel making, while the remainder will be used for power generation.

Maybe it is just sour grapes, but the news does not lighten my current mood or temperature, which can best be described as volcanic.  Why?  Because short-term gains are being put before long-term national interests, and because I am sweltering in my lounge room through yet another extended extreme heatwave.  My phone tells me it is 41º celcius (105º F) outside.

Frankly, I get sick of claims that Australia can do little to reduce global carbon emissions; the argument being that we are minnows when it comes to the global carbon footprint.  Australians account for a mere 0.5% of the global population, and yet our emissions comprise 1.3% of global emissions.  That sounds kind of unfair to me.   Ian Dunlop, in a piece written for Pearls and Irritations, states that if exports are taken into account, Australia is the sixth largest carbon polluter globally and will soon rank higher as LNG exports increase.  We have skin in the game.

To hear some talk, you would expect that Aussie coal has some special properties that other countries cannot do without.  That strikes me as odd because both China and India (significant markets for our exports) have coal reserves of their own to rival Australia (top 5 countries by coal reserves – USA, Russia, China, Australia, India).  Is Australia such a low cost producer that our coal is much cheaper than coal extracted “in-country”?  Perhaps subsidies or concessions (eg. concessional loans and grants, royalty-exemptions or fuel-tax credits) make it more cost-effective to invest in Aussie coal production and/or import Aussie coal?  Lucky the value of the Australian dollar has plummeted because now all those high-tech goods and services that Australian businesses might want to import to make our economy more productive, are so much more expensive, while those things we just dig out of the ground and ship off to (more diversified?) economies, are so much cheaper.  My goodness, we are practically giving that coal away.

Apparently, there are enough coal reserves in the Asia-Pacific region to last another 100 years, which is probably just long enough to see us out as a species.  How ripped off the Ruskies must feel!  Their massive coal reserves are relatively unexploited.  To add insult to injury, it is damn cold there, so a warmer climate could conceivably advantage their agricultural production — a bonanza in the event of global food shortages.

If sufficient national leaders believe that mining carboniferous minerals is all that their countries have to offer the world, then they will end up eating the global pie.  But they can’t have it too, not without divine intervention.  I imagine unscrupulous nation states on the edge of this precipice, might be amenable to a little tinkering in the collective psyche of those who, for whatever reason, genuinely do not believe in anthropogenic climate change.  I can also imagine that such players might be only too happy to provide assistance to others with a vested interest in protecting the fossil-fuel industry.

But I digress.  Heatstroke.  It has been argued that Australia’s climate policies are being held to ransom by conservative, neo-liberal, climate change deniers within the government.   I don’t believe a word of it.  Conservative senior minister, Peter Dutton, has reportedly said that, “Time doesn’t mean anything when you’re about to have water lapping around your door.”  If he and his colleagues know the consequences of unfettered coal use, then it seems amoral, even cruel, not to prioritise policies that minimise carbon emissions.  If they don’t understand the consequences, then they are not fit to govern.

My own view is that with everything Australia has to offer, we have no business being in the coal business.

It used to be that I found winter in my region, the most trying season.  This honour now goes to summer.  Heatwaves like the one we are currently experiencing are becoming all too frequent.  And they are deadly.  I’m a little worried that my love might have a heart attack.  He’s stressed and tired.  He hasn’t slept well for weeks.  It has been too hot.  My poor dog, Makea, is really suffering.  I will never get another Finnish Lapphund.  The bossy red dogs are coping much better.  The bossy possum returned when we forgot to shut the garage door.  He likes it when we spray him with mists of water.  Meanwhile my youngest is attending a circus festival in the Otway Ranges, a beautiful venue surrounded by wilderness.  The fire danger is extreme.

Here is a photo of my collection of sun umbrellas.  I have four in total to shade the concrete in my backyard. 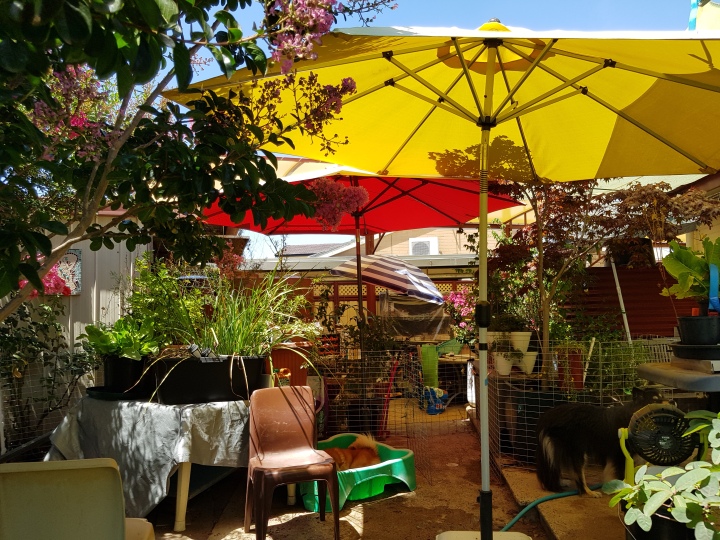 Our tap water has turned yellow.  There has been a huge increase in the demand for water.  This increased draw has stirred up sediments in our water storage system.  The water tastes awful, but at least we have water.  For now.  Don’t get me started … 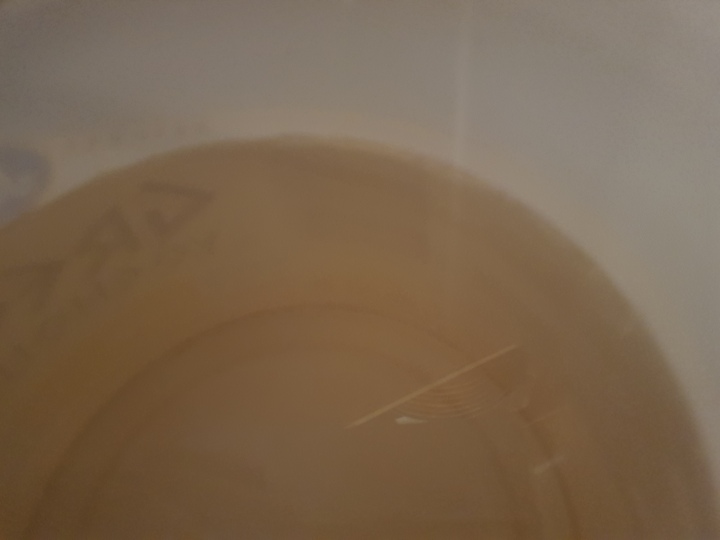 This is my response to the Ragtag Daily Prompts —  Collection and Quest  viz my umbrella collection and because I’m on a quest to separate fact from political spin.