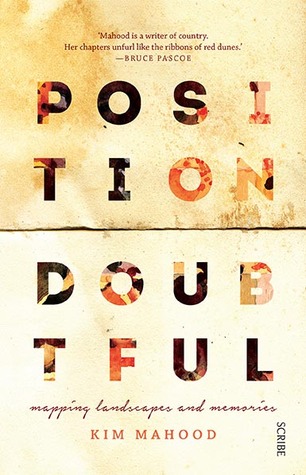 Position Doubtful, by Kim Mahood, has been reviewed many times and I’m not sure what more I can say about it that hasn’t been said already by others.  It is, in my opinion, a significant book.  For this reason, I will provide my own review if only to raise awareness of the book.  The general consensus is that Position Doubtful is a truly wonderful book and I concur with that assessment.  It is a memoir of key parts of Kim Mahood’s life.  She reflects on her experiences as the daughter of a white family who settled in the Tanami desert region to establish and manage the Tanami/Mongrel Downs Cattle Station in the 1960s.  She also documents her return visits to Country and community, and the connections she forms over more than 20 years from the mid-1990s.

The landscape is central to, and the catalyst for, Mahood’s book.  The Tanami is rooted in Mahood’s psyche.

“Perhaps it [loving a place] is like loving God, and what you get back is a reflection of what you put in.  Apart from the deep and unequivocal love I have for my family and close friends, there has been no other love in my life as sustained as the one I have felt for a remote pocket of inland Australia… When I am there, I’m alive with an intensity I feel nowhere else.” (p2).

Mahood inherited from her father an aeronautical map of the Tanami Downs station, which spanned some 1,500 square miles.  The map contained annotations of landmarks labelled “Position Doubtful”.  So began Mahood’s journey to learn everything possible about her Country.  I use ‘Capital C’ Country to describe Mahood’s place, because this is the term used by Aboriginal people to describe the country to which they belong.  As I wrote in a previous review, to Australian Aboriginals, “Country” is more than just a piece of land, it is all the landforms that make up the country, and it is all the creatures (people included) that inhabit the land (or sea), and the spirits that have formed it.  Country is a spiritual place.  It seems to me that the country is just as much ingrained in Kim Mahood as it is in the Aboriginal inhabitants, but only with the knowledge imparted by its indigenous inhabitants, can the significance of that connection, or the sense of place, be fully realised.

With the assistance of whitefella friends and the Aboriginal communities of Balgo and Mulan, Mahood maps not just the geographical features of the lake and desert country, but also the stories of the plants, creatures, spirits and people that inhabit it, and through this process becomes an integral member of those communities.  The ties that bind all together are both strong and ephemeral.  Mahood often uses the term transitory to describe her place in the landscape.  Ultimately, the landscape is bigger than us all.  When we are gone the landscape will still be here, but the landscapes embodies the memories of those that have interacted with it.

Position Doubtful is rich, textured, multi-layered and brimming with metaphor and nuance. I suppose this is not surprising given Kim Mahood is also an artist and poet, as well as an author.  She brings a mystical quality to her writing.  She paints in words.  Her prose is wonderfully descriptive and lyrical.  The stories are humorous, poignant and sometimes tragic.  Kim Mahood illustrates that Australia is a land of contrasts and deep divisions, while at the same time we have much in common.  My feeling towards the book also illustrate that contrast.  I loved it and yet I felt a deep melancholy as if the book was documenting the final days of a culture that had for so long been vital to this landscape.  Position Doubtful is a must-read for many Australians who want to learn more about what it means to be an indigenous Australian living in a remote community.  Mahood is very insightful about the complex interactions between whitefellas and blackfellas.  She leaves it to her readers to infer the implications for closing the gap between Aboriginal and non-Aboriginal Australians, and reconciliation more generally.

It seems to me that the position on a range of contentious issues hinted at in this book — such as how to meaningfully achieve reconciliation between the First Australians and the descendants of white settlers, what constitutes an appropriate allocation of resources between country and city, and the prioritisation of policies for the collective good relative to private gain — remains as doubtful as ever.

Other bloggers I follow have also loved this book.  See the review by Lisa at ANZ Lit Lovers here and the review by Sue at Whispering Gums here.  More reader reviews and information on where to purchase the book can also be found on GoodReads.

Position Doubtful was published by Scribe in 2016.