I am reprising my poem about my little dog, Ama, for the NaPoWriMo prompt about dogs you have known, seen, or heard about.  It is the best poem I’ve ever written (if I do say so myself) so I can’t offer any better.  The poem is written in the style of bush poetry (ie. it’s long) and there’s a nod to Banjo Patterson’s iconic poem, The Man From Snowy River.  In that poem, “the Man” rides his mountain pony down a steep hill after a herd of brumbies (wild horses).  There is some controversy as to whether that poem was a true story.  Unlike Mr Patterson’s poem, I can vouch that Ode to Ama is completely true.  Enjoy.

Ode to Ama – A Bush Ballad

There once was a wild spirit named Ama.
Her favourite trick was to engage in a little holiday melodrama.
It was at Jindabyne, a Winter holiday so divine,
in all respects, a dog holiday mecca.

She wanted to hunt with the goddess Diana.
It was an essential part of her Finnish Spitz nature.
So she surveyed the scene, only daring to dream
that her wish would come true, sooner or later. 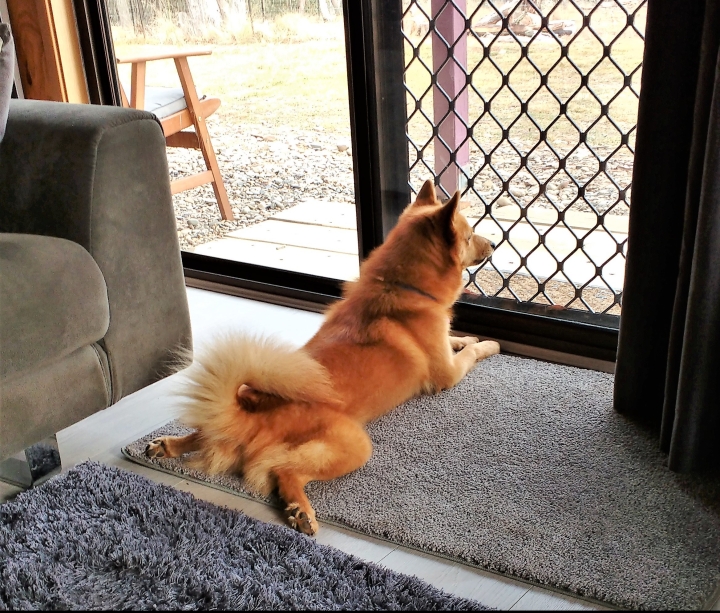 Her dream was to run with the wild foxes and dingoes,
On the trail of the elusive echidna.
So she took a stroll, making sure not to disclose
That her intent was indeed purely sinister.

She weighed up her options, so Machiavellian,
feigning enjoyment of her current situation.
But do not be fooled, by one so untrue.
She’s really no more than a red-headed hellion. 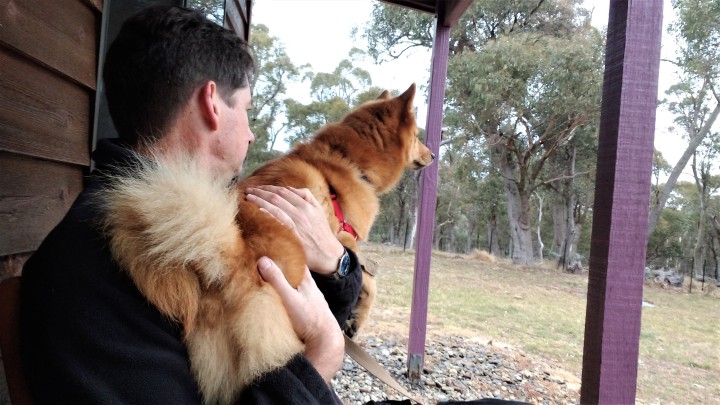 If you smelt a rat, it was most likely that
She was cooking up some kind of rebellion.
Your heart turned to goo, there was no wrong she could do.
Your duty to wait on her every ablution.

The morning had dawned, yet the ice had not thawed.
Soon the birds began their morning commotion.
Good morning to all, starting with a short trip outdoors
For the little miss to complete her bowel motions.

The minx was not at all daunted as she sashayed and sauntered
Her sole goal to breach the perimeter.
No socks, only boots, plus a thin polo shirt.  The air it assaulted.
You’ve never felt so cold.  You’ve never felt chillier.

Taking her cue, Ama chimed a-roo-roo-roo.
You were aglow from her somewhat earnest attention.
You drew in your breath, but it was a hole in the fence, not you
That was the cause of her fervent devotion.

A gap under the rickety fence!  Best keep up the pretence.
Praise Dog.  Her not-so-silent prayer had been answered.
Alas and alack, her master, no fool, had seen the hole too.
Her strategy?  Obfuscation and confusion.

For Ama was not stupid, not the slightest bit dumb.
She figured where there’s one hole, there’s another one.
And in the confusion, she escaped her master’s view
And scarpered for the Snowy River, not a moment too soon.

Fear lodged inside her master’s chest.
Frosty morning.  Dragon’s breath.
What direction?  How to know? Panic. No, dread.
Find her quickly, or his little girl could be shot dead!

From the valley, a piercing bark.  So far away, but you took heart.
Time passed.  You picked up your pace and gave chase.
Such a complicated little fox, your little mate.
No more time.  You didn’t hesitate.

The little vixen. The siren’s call.
The river glimmering.
When you thought you could go no more;
You saw her in the distance.  So proud, a sore paw;
But returning.

If you ever have a chance to go to Jindabyne,
Chances are you’ll be just fine.
But do not believe a single word you’re told
of secure dog-fences on which you can rely.

Be sure to wear your warmest coat.
For you may find yourself freezing cold,
And running down a mountain side.
Better still, tie up your doggone dog.
You’ve been warned.
You’ve been told.

As Winter casts a misty shawl,
From the Snowy River, a siren calls.
Her name is Ama.
On the hunt.  In nature’s thrall.

Note to Reader – Ama is still very much alive and just as naughty and manipulative as ever.