My arm was twisted last year (not very hard) to make a mosaic for a blogger friend.  My friend’s property was burnt in Australia’s huge summer bush fires.  Fortunately, his house survived.  Some of my readers may know Brian from Bushboys World.  One of Brian’s favourite little birds is the Eastern Yellow Robin.  So that was the first mosaic that I made for him.  I’ve also made a second one of a Red-Browed Finch.  I had to make two mosaics otherwise the first one would be lonely.  Unfortunately I attacked the second with a sharp knife today because I didn’t like the shape of its head.  Not that anyone would have noticed the problem because it is not as though people will be looking at it close-up once its hung.  I would have known though, so it met its fate.  I’ll need to fix it, then I can share it with you.  Stand by for that one.

My creative process involved adapting one of Brian’s robin photos.  Here is his photo. 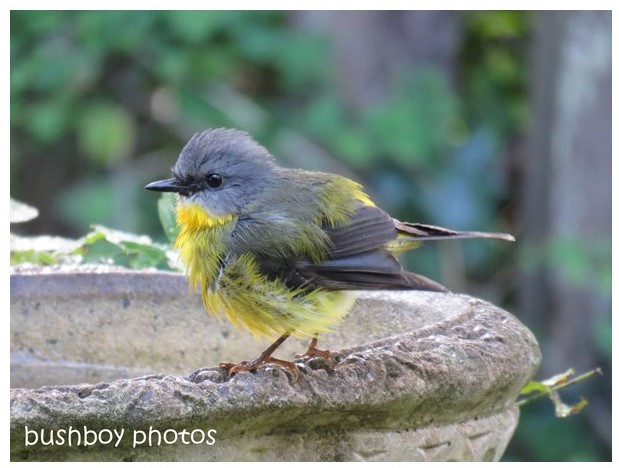 This is what I came up with (see below).  Sorry for the pumpkins and grass in the background of the photo.  I was trying to hide the kitchen mess.  Still, it looks artistic, don’t you think?  My son, the naturalist, thinks the little bird looks like a Gerygone because the beak is too curved for an Eastern Yellow Robin.  Hopefully Brian won’t be too fussy about the small details.  Also, I hope he is in no rush because I have to go sealant shopping and then make a trip to the post office.  Not so easy in “these difficult times”.

It has not been a good mosaic year for various reasons.  The weather has turned cold now so I may not be able to make any more until next spring.  I do have plans to make a couple more for friends.  Not sure what yet.  We’ll see.

In other good news, my local cafe raised $450 for Bush Heritage Australia when it raffled my mountain pygmy possum mosaic.