My mother, J, lives on a wonderful property in the Gladstone area (Queensland, Australia).  J and B run a few cows and agist some horses.  The property is not a bird sanctuary as such, but as the property has a permanent source of water (a very large dam that hasn’t dried up in all the time they’ve lived there), it attracts a wide array of birds.  During my recent visit, I tried to snap as many birds as possible.

My mother’s garden has a good number of grevilleas so naturally her garden attracts many honeyeaters.  Honeyeaters can be quite aggressive in defending their territory.  A bank of spiky dense shrubs has been removed as it tended to shelter snakes, as well as small birds.  Grand-children and snakes are not such a great combination so the spikes had to go.  The property has also been cleared of a number of trees in recent years for grazing, so there is less tree cover for woodland birds such as pardalotes, robins and finches.  Hence, there seemed to be fewer birds of this type.  It is always tricky balancing conservation and grazing.  The woodland birds were probably still about in areas where I feared to tread.  There was a rogue steer roaming the paddocks so I may have been a little timid in my venturing.  Time of year may also have had a bearing on the number of these birds.

Anyway, without further ado, here are some of the many birds that call my mum’s place home. 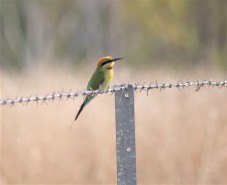 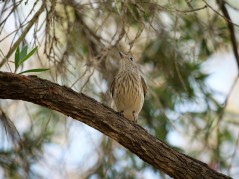 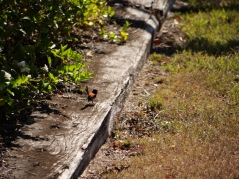 The cheeky red-backed wrens made use of a grove of clumping bamboo and a nearby hedge to gain some protection from the pesky honeyeaters. 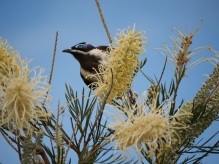 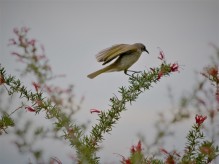 There were many more water birds than appear in the photos below.  I have better photos of the Royal Spinebill and Great Egrets from other locations on my holiday so I will save those photos for another time.  Resident brolgas took it upon themselves to go on holiday for the week that we were there.  Oh well, those are the breaks! 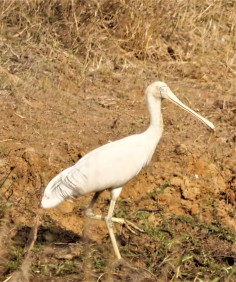 Check out those feet!

The Little Egret has a black bill.. 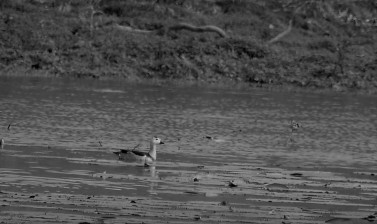 With so much grassland, there were quite a few raptors about but I wasn’t able to get any decent photos.  I will have to work out the tracking on the camera.  The Butcherbirds were also regular visitors to the garden, but again I have better photos from another location.  Here are a couple of birds that didn’t fit the above categories – one common and one a vulnerable species.  To say we were excited when we saw the Squatter Pigeon is an understatement. 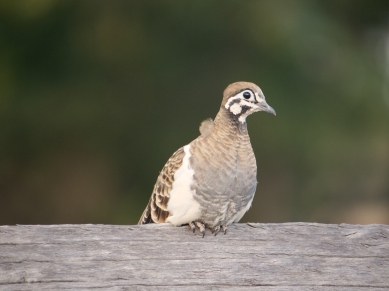 I would like to thank MNL for the Ragtag Daily Prompt “Bird” today.  It gave me a bit of motivation to get my post finished.

Anyway, that is your lot for today.  More to come in future so stay tuned if you have a penchant for birds.