I’ve never been much of a camper.  Until recently, I could count the number of times I’ve been camping on one hand.   For something different, and to save money, my love and I decided to take a driving/camping holiday en route to visit family in Queensland.  We had no excuses because my big boy worked in a camping store so he could kit us out.  I now realise what I’ve missed out on my whole life.  This is the story of our first night camping. 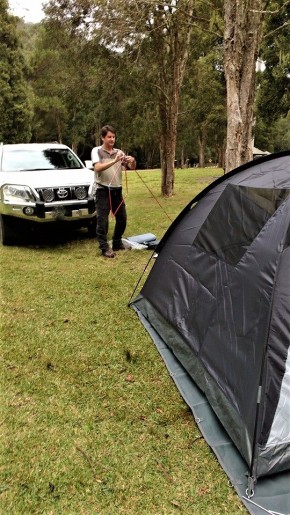 We camped at the Gloucester River Campground, at the foot of Gloucester Tops (part of Barrington Tops).  Unfortunately, I have very few photos because we arrived just before darkness fell, and as this was the first time putting up our new tent which we had only bought the day before, taking photos was the last thing on our mind.  It was May, the off-season for camping, and so we were the only people there.  Peace and quiet.

Surrounded on all sides by rainforest, it was damp and chilly.  We soon had our tent up and, after we cursed that we hadn’t brought an axe with us, we eventually managed to get a little fire going.  A few fire-starters wouldn’t have gone astray either.  Putting up the tent was no mean feat, because we were joined by a flock of little wrens and robins all determined to help.  A few even decided to hop into our tent.  We chased them and the mosquitoes out.  Not to be put off, the curious little birds continued to bounce around us while we drank a cup of billy tea.  I was completely captivated.  I felt like Snow White, especially when one hopped onto my outstretched leg.  Not long after, as dinner smells drifted over the campground, the resident possum came to investigate the food situation.  He was a persistent little bugger (ie. Aussie slang for scamp in this context), and wouldn’t take shoo for an answer.  As light faded, we also saw a pair of lyrebirds.  These normally elusive birds were clearly used to human company. 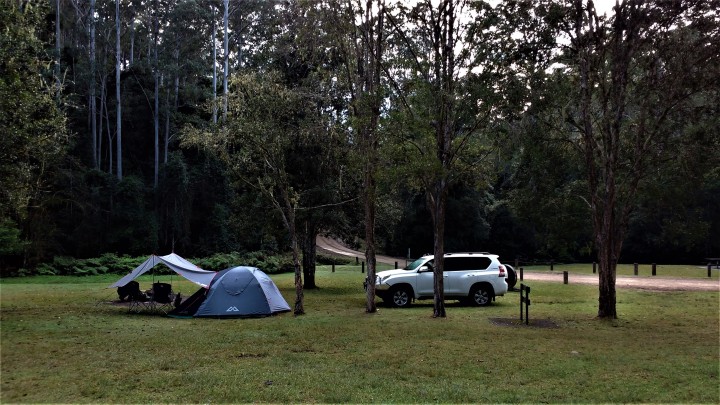 I don’t think I got much sleep that night.  Night in the rainforest is when all the creatures come out to play, and they produced a veritable cacophony of sound.  At one point, I was sure that someone or something was being murdered.  Perhaps pig hunters were out with their dogs and they had caught a boar.  Wild boar!  I was ready to sleep in the car.  My love is a man of great sense, and perhaps very little imagination, because he suspected the culprit was a barking owl.  I thought the murderer was out to get us, because of course, possum was not convinced there was no food for him.  He (the possum) guessed rightly that the food was stored inside the tent, so he kept rustling around outside, trying to get to it.

We had more adventures the next day, but that is a post for another day.  I will leave you with one last photo.  There are a number of river fords on the way to the campground, some are even guarded, not by trolls (I would have expected that), but instead by this unlikely pair of Highland “Coos” (as we like to call them).  They weren’t budging, so I had to get out of the car to chase them away. 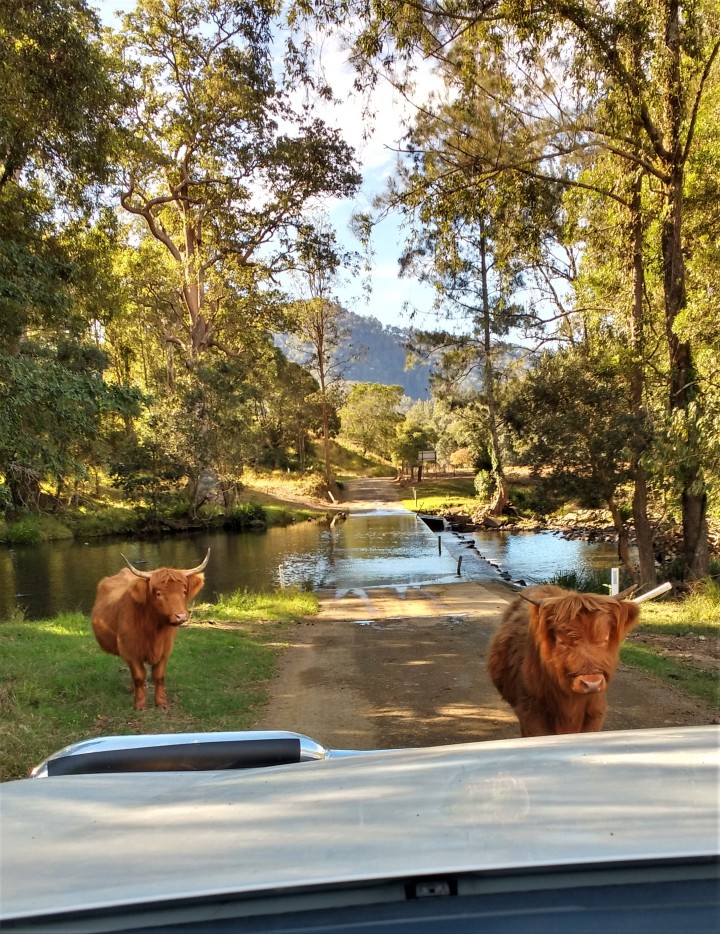 You would have been captivated too.

24 thoughts on “Snow White and the Two Coos”