Ladies and gentlemen, this is my very first book review.  The book is Chaconne by Diana Blackwood.  I have posted it on GoodReads (I think) but I don’t seem to be able to make the tech work to share it to my blog.  I’m still learning.  Anyway, here it is.  Enjoy. 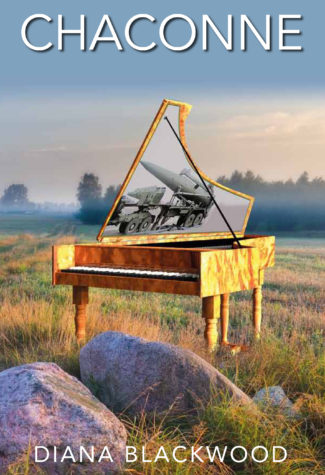 Diana Blackwood has written a well-crafted and poignant coming-of-age story.  Eleanor is a highly intelligent, damaged young woman.  Abandoned by her father as a child and with an absent mother, Eleanor is left rudderless, suffering from a ‘fuzzy sense of being shut out of her proper story, as if she had failed at youth, been found wanting by life itself’.  Eleanor runs away to Europe to find passion and pursue the romance of a new and refined life far from her mother and ‘all the dreary people who had no inkling of who Eleanor Weston truly was’.  The trouble is Eleanor doesn’t really know who she is herself.  Of course, the romance is just a fantasy and the men who occupy Eleanor’s life are self-absorbed, emotionally unavailable or needy in turn.  Abandoned again in Paris, Eleanor takes another lover and moves to Germany.  There is an uncomfortable truth in this story: that men and women sometimes use one another to escape their own demons and for their own convenience.  The feminist in me rails against this, but the unreconstructed me accepts this as an uneasy reality.  Eleanor is no victim, or doormat; she is plucky but vulnerable.

At the heart of the story is friendship.  The two young women, Eleanor and her friend, Ruth, are a constant source of support for one another.  Together, they are each other’s voice of reason, and the repartee between the two friends is pithy, insightful and delightfully humorous.  Other friendships made during her European sojourn also nudge Eleanor along, giving her a sense of her own self-worth, and enabling her to become an active participant in life rather than merely an observer.

We learn that Eleanor’s abiding passion is singing and the music of the Baroque period.  She explores this passion, tentatively at first, but then with growing confidence.  Her music gives her life purpose and fills the void created by loneliness and her childhood trauma. It also gives her courage in the face of adversity.  The spirit of the Baroque is a belief in the power of music to touch people’s lives, and so it seems fitting that Eleanor’s love of this music sets her on a path to enlightenment and healing.

I love this book. I love it for its pithy observations, snappy one-liners, and clever turns of phrase. I love it for its lyrical description of foreign places, its political consciousness and sense of history. I love it for its quirky, messy characters. I love it for the power of sisterhood. I love Eleanor despite her foibles and anxieties. I want to admonish her for her silliness and give her a hug at the same time. Blackwood handles the mental health issues with sensitivity and compassion, but also with wry wit, humour and irony.  She doesn’t judge and for that I am thankful.  The novel is set against the Cold War and the nuclear arms race, and this climate of fear further adds to Eleanor’s insecurities.  If you prefer your heroines fully reconstructed and fairy-tale endings, or if uncertainty and loose ends trouble you, then Chaconne may not be the book for you.  So often women characters with mental health issues are portrayed in literature as mad, drug-addicted and hopeless, with every day a rollercoaster of emotion and drama.  Instead Chaconne is a story of resilience and quiet survival.  This is something we should be celebrating in our female characters.

There is a lot going on in this book.  The theme of change and constancy, as represented by the musical pattern of the chaconne in Baroque music, runs strongly throughout the book.  Art and commerce, opportunity and loss, certainty and uncertainty, sickness and health, hero and villain, clean and dirty, truth and denial, friendship and loneliness, the irrational and rational, romance and pragmatism, privilege and disadvantage, optimism and pessimism, war and peace:  all butt up against each other.

I highly recommend it.

Find it on GoodReads