Regular readers will know that in August, my true love and I went on holiday – a rather long road trip to visit my mother who lives about 1,500 north of me.  In the place I live (Canberra), the winters are freezing, grey and dreary.  In the north where I went (as far as Gladstone), it is relatively tropical, although they have had some coolish mornings.  To escape the cold, many retired folk, known as Grey Nomads, regularly spend months travelling the roads of northern Australia.  We had a taste of that life for a few weeks.  I’ve tried to do a bit of a ‘compare and contrast’ photo essay to represent my August.

By August, I am just about over winter.  I seek hints of spring.  A late winter bloomer, wattle blossoms are often the first sign.  But the wattle seemed reluctant this year.  No amount of wishing would hurry it along.  So we packed our bags and left. 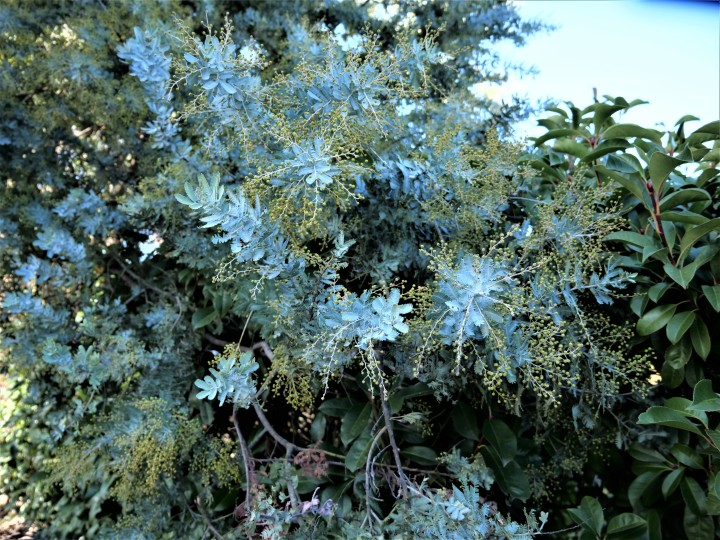 We thought we would travel the coast road for part of the way.  It is warmer on the coast.  One of our stops was at Port Macquarie (hello to the good folk of Port Macquarie).  Port Macquarie is a tourist town.  It is lively all year round as Grey Nomads flock there in winter.  We arrived there late on Saturday afternoon and thought we might hire a cabin.  We hadn’t booked ahead.  For $230 a night, we soon decided that camping was our best option.  We pitched our tent in the dying light.  Eastern Australia is in drought so of course it rained.  The pearly dawn was a sight to behold.  We went to a local cafe in the hope that our tent would dry.  It didn’t.  The locals were rugged up and so were we. 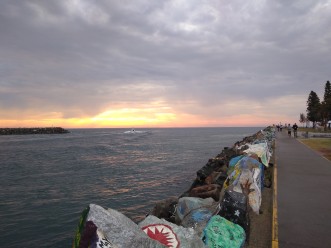 The coast road, a bit of a misnomer, is a little boring, albeit much safer than in times past. We made a break for it and headed inland.  How cold could it be?  Actually, pretty cold.  Minus 2⁰c  overnight but as we were much further north, the days were glorious (mid 20s).  We decided to camp at a couple of the water storage dams, though often we were the only campers.  RVs and caravans are now de rigeur.  Still, this is the life! 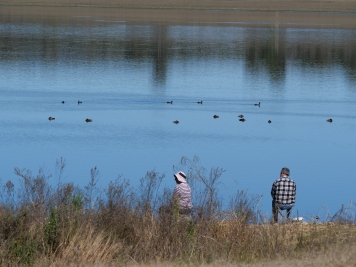 This is the life.

The water is low and the red-claw are deep.

As we thawed out on our morning walk, we came across what we thought was an albino Wallaby catching some rays.  Do you think it is an albino?  And nearly bumped into a magpie.  In the north, spring comes early and so do swooping magpies.  Yes, I’m talking about you Mr Magpie.

Is this an albino wallaby? It was very pale and shone in the sun.

Dam levels are low.  Drawing water for agricultural use has been suspended for one of the dams we visited.  Farmers and local councils race to complete hazard reduction burning in preparation for the coming bush fire season.  It was incredibly dry.  And windy.  We saw plumes of smoke in the distance.  The air was often filthy with smoke and dust particles, presenting an ominous haze. 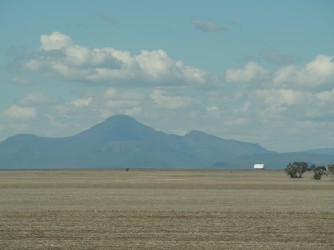 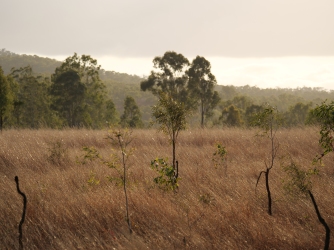 Blowing a gale, but this lot, all wearing T-shirts, must be Southerners.

Those in the north lucky enough to have a dam for irrigation or some residual moisture in their soils, can still have some beautiful blooms.

The Blue-faced honeyeater is a regular photo-bomber.

As we headed south and inland again, the season became more like what we were used to – cold, bleak and dry.  So dry that donations of hay are being trucked across the country to feed stock.

Some geese try to get warm on the road.

But bleak can also be beautiful. 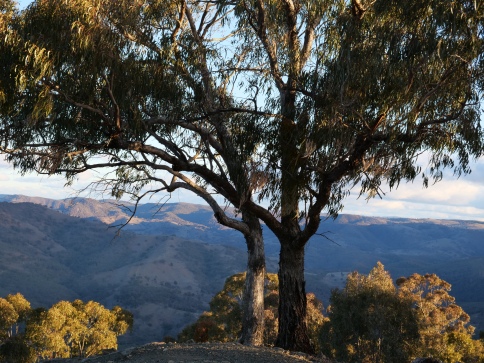 In the winter of life, there is still time for a welcome chat. 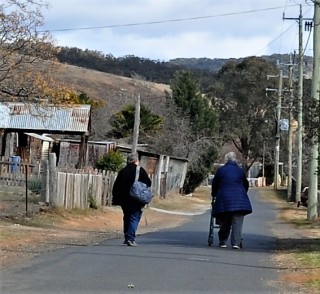 As we traveled across parts of eastern Australia, I was struck by how incredibly dry it was.  In fact, although I’ve made this trip a number of times before, I have never seen it quite so dry.  On the day we returned home, fires broke out across the two states we visited, many in areas that we had traveled through.  Property was lost and a helicopter pilot was killed when his water bucket became caught in trees.  A woman was left to defend her property alone because her partner was fighting fires in the United States.  The official start of the fire season has been moved forward to 1 September.

Every month Su Leslie from Zimmerbitch hosts a monthly photo challenge, The Changing Seasons.  Click on the link to find out how to participate in the August Challenge.

39 thoughts on “The Changing Seasons – August”